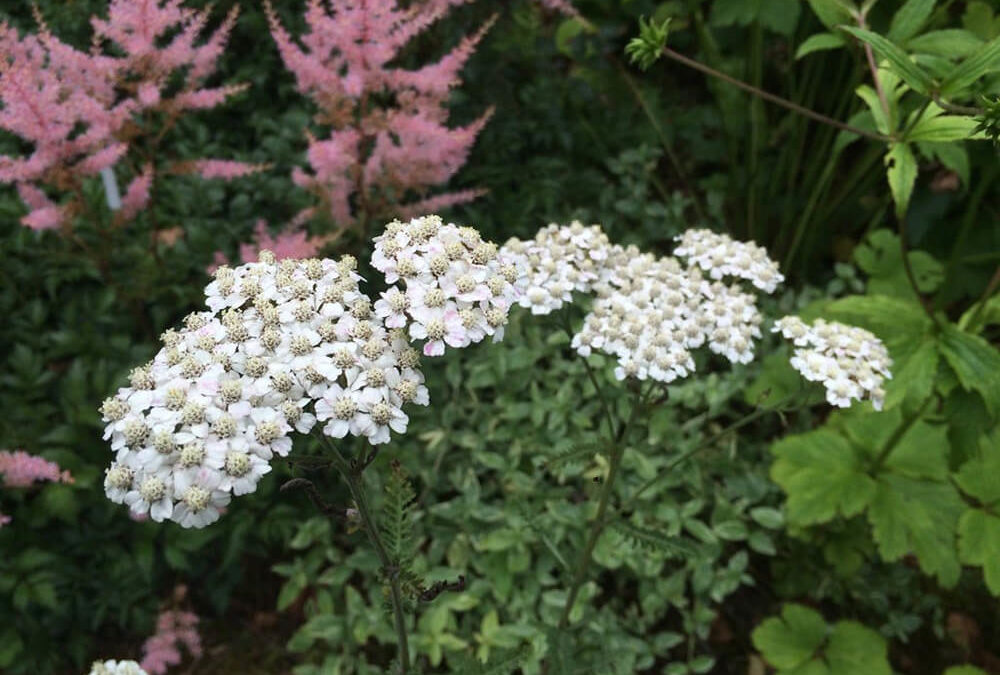 Yarrow is a perennial herbaceous plant with a thin, horizontally branched creeping rhizome.

Yarrow is found in Europe, Asia and America. In many places in Western and Central Europe, the species is cultivated on industrial land, the most valuable being the recognized variety “Proa”.

For the production of yarrow blue essential oil, the whole stalk is extracted, the concentration of oil being concentrated mostly in the color, then in the leaves and at least in the stem.

The healing effect of yarrow drugs is mainly due to the essential oil, which consists of monoterpenes and sesquiterpenes with the main ingredient chamazulene, which gives the oil its blue color.

The rich content of biologically active substances determines the herb with a wide range of action and a valuable medicinal plant for practice.

The herb has anti-inflammatory and hemostatic effects.

According to legend, Achilles and the ancient wars used yarrow to inflict wounds on cuts or burns.

Yarrow is part of various liqueurs, vermouths and other beverages.

Yarrow is a dry and cold-resistant plant.

It grows in the plains, semi-mountainous and mountainous regions and withstands temperatures up to – 30˚ C.

It is not demanding to soil and air moisture and soil nutrients, but prefers light and humus-rich soils for its development.

Avoids too moist and heavy soils. The species is not demanding to light, which is why it tolerates some thickening of the crops.

However, the excessive density of plants leads to a decrease in chamazulene in the drug.

The best precursors are cereals, winter cereals and fodder crops, which leave the area free of weeds and free it until the beginning of October.

The species can be cultivated on different types of soils, but the best results are obtained on deep and loose, sandy-clay soils, moderately rich in organic matter, with a reaction of the soil pH 6.9 – 7.5.

Swampy and acidic soils, as well as heavy clay soils are not suitable for its cultivation.

The plant does not require abundant fertilization. It is plowed at 25-30 cm, after which it is harrowed and milled.

Yarrow is propagated in two ways: Seed by direct sowing and Seedlings.

The most suitable time for sowing the seeds directly in the soil is in autumn – September-October. The seeds can be sown in March-April, while there is still moisture in the soil. Sowing can be done with a drill at a distance of 60-70 cm between rows. Before sowing, the area is well compacted with a roller.

It is applied when there are few seeds. The most favorable weather is from mid to late August in open beds.

For planting of one decare it is necessary to produce 10 sq. M. Of seedlings, and for 1 sq. M. 1-2 g of seeds are needed depending on the germination and purity of the seed.

For the production of seedlings can be carried out at the desired time of year, but with varying degrees of success. During germination, the area should be kept optimally moist by mulching and regular watering.

The seedlings are ready for export when the 4th – 5th true leaves are formed and have a well-formed root system (about 2 months after germination). The best time to export seedlings is the end of September-October.

The sowing and planting distances are 50 x 30 cm for manual cultivation and 70 x 25 cm for mechanized cultivation.

The best results are obtained when the seedlings are made in seedling trays.

The roots of the plant are not intertwined, which allows the seedlings to be planted at the desired time.

The advantage of seedlings in trays is that you can plant it in the field all the time of the year without stress.

When there is moisture in the soil can be planted without watering. It is enough to water the trays well beforehand. In each peat nest on the trays in which we offer our seedlings there are several seeds that form a small tuft.

This gives it extra energy when the plant is planted in the soil. In mechanized planting, seedling machines with discs should be used. Due to the structure of yarrow seedlings, pinching machines do not give a good result.

The area should be regularly weeded and dug up depending on the weeding of the soil.

When cultivating yarrow, 2 mowings can be carried out – the first in July and the second in October, but necessarily in dry and sunny weather.

The raw material is harvested in full bloom and processed fresh or dry.

Watering, fertilizing and spraying reduce the oil content in the plant. Large leaf mass is not a factor for higher oil yield. Spraying with preparations also stresses the plant and reduces the yield. The oppressed plant gives better results.

An important factor is the mowing itself. Harvesting is done when the plant has begun to bloom slightly, but before the seeds ripen. The whole stalk is mowed in the afternoon after a series of warm and sunny days. 30 cm

The filling of the cauldron is extremely important. The finely chopped mass seals many cauldrons and the steam looks for easy ways where it does not cover the whole raw material. It is best to seal the pot by cutting the stalks to 10-30 cm, loading them more often and compacting them more often, especially on the walls of the vessel.

The size of the boiling vessels must be in the proportion 1 / 1.5, slower steam speed and multi-section receiver / Florentine vessel /.

Due to the close relative weights of oil and water and their difficult stratification, the temperature of the distillate leaving the cooler with a certain degree and longer stay in the receiver for better separation and salt can be used to support this process.

The presence of a blue tint in the wastewater is an indicator of oil loss, which can be extracted with cohubation, which will further increase the cost of the process.

Essential oil in terms of quality and quantity is better when obtained by des- tilation in boilers that work on the principle – Clevenger apparatus.

The oil is stored in full glass or aluminum containers in a cool and dark place for up to 2 years.